while and do while loop in Java

while is another looping statement in java which allows programmers to repeat the execution of one or more line of code as far as a condition is true. The computer keep repeating the execution of statements inside the while loop until the condition get's false. Programmer can also read this as " execute given statements while something is true ". The syntax of while loop is :

Here condition is a boolean expression which must return either true or false. If it returns true, the code written inside while block get's executed and if it returns false, while block code will not be executed. Everything that comes inside matching curly brackets {} after while keyword is the part of while statement which is also called as while block or while loop body.

Control flow diagram of while loop 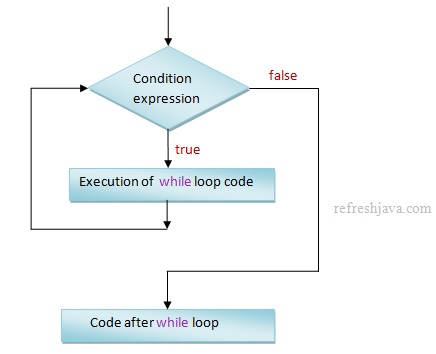 while loop program in Java

Can I test multiple conditions in while statement ?

If the condition in while loop always returns as true, it becomes an infinite loop.

do while loop in Java

do while is also a looping statement in java which allows to repeat the execution of one or more line of code as far as a condition is true. It's very similar to while loop, the only difference is that in do while loop the statements inside do while block executed first then condition expression is tested. Therefore the code within the do block is always executed at least once. The syntax of do while loop is :

Note the semicolon(;) at the end of while statement, it's the part of declaration, programmer usually misses this while using the do while loop in java, which results in syntax error.

Control flow diagram of do while loop 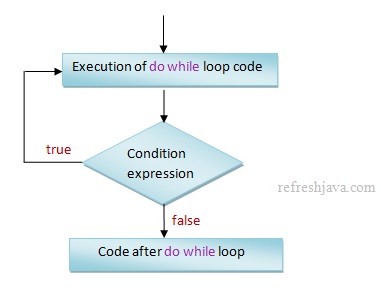 do while loop program in Java

Difference between while and do while loop in Java

When to use for, while and do while loop ?

When you know the code inside the loop should be executed for a fixed number of time, use for loop. When you are not sure about repetition number, go for while loop, in this case if you want that your code should be executed at least once, go for do while loop. Just for an example if you want to print a table of a number, you know the iteration should be done for 10 times, use for loop and let us suppose you want to know how many time a random integer number is divisible by to 2, go for while loop eg. 256 is divisible 8 times, 12 is divisible 2 times only etc.