String is one of the most widely used data type by java programmers. Things that we normally use in conversations like "hello", "refresh java", "Hello world", "It's easy to learn java", name of a person, address of a person etc are some of the examples of string in java.

Here String is the data type, var_name is the name of variable which is given as per the programmers choice and the value of string variable is given inside "". You need to use the double quotes("") to create string values in java.

Which approach I should prefer to declare a string, "" or new keyword ?

Though you can use any of the above approach but creating a string using new operator is not commonly used and is not recommended as it creates an extra object inside heap memory.

String values in java are stored inside a special memory known as string pool or string constant pool which exist inside the heap memory. This memory is used to allocate space for string values only. String values given inside "" in your program are created inside string pool. To understand memory allocation of strings, let's consider we have following string variables declared inside a program. 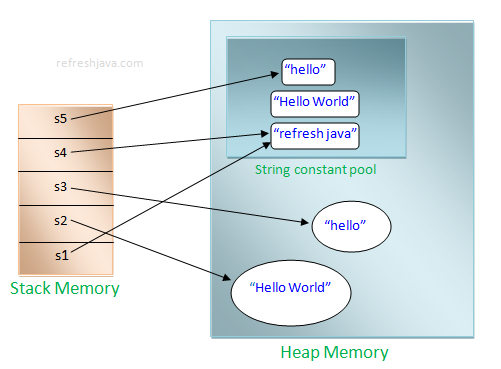 Let's understand how java assigns memory for above strings variables.

Why java uses a special memory for string ?

Since String is one of the most useful data type, to improve the memory usage and application performance java usage string pool memory as it doesn't create unnecessary or duplicate objects, instead it uses the existing string objects.

What is string literal in java ?

How can I check if two string variables or literal have same reference(address) ?

You can use == operator to compare if two string variables or literals have same address. For example s1==s2, s1==s4 etc. You can refer next tutorial for more details about this.

This is also used very often by java programmers. String concatenation is a way of concating(adding) two or more string values. Java provides the feature of adding two or more string variable or values using plus(+) operator. For example you can add two string values "refresh" and "java" as "refresh"+"Java" which results as a new string "refreshJava". Java also provides the concat method in String class to concat two string variables or values. You can refer next tutorial about this method.

String is immutable in Java.

Immutable simply means something that is not changeable, once a string value in java is created, you can not change that value. For example in above program the code s1+s2 will create a new string "refreshJava" and assigns the reference of this in s1 but the original string "refresh" will still be there in string pool memory, that is why string in java is immutable.

Why string is immutable in Java ?

Since immutable strings can not be changed, the same string can be referenced in multiple programs or applications which significantly improves the memory usage and application performance.