Java is a programming language and a platform. It was developed by the company named Sun MicroSystems which was later acquired by Oracle Corporation. Now oracle manages and releases different versions of java. Java was created by a team led by James Gosling at Sum MicroSystems.

A program is basically a set of instructions written inside a file by following a programming language syntax. It performs a specific tasks when executed on a device. For example program of "adding two number", "multiplication of two number" etc.

What is syntax in java ?

The image below shows a very basic java program written inside a file. To get more detail about your first java program you can refer My First Java Program section.

As you can see in above image, the program contains English based words(also known as commands). These words have special meaning in java programming language. We will get to know more about these words in later tutorials. The image below shows some of the devices where java programs are executed to perform specific tasks. 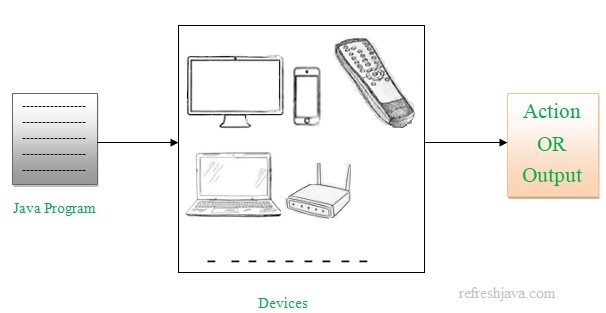 Is java a high level language ? 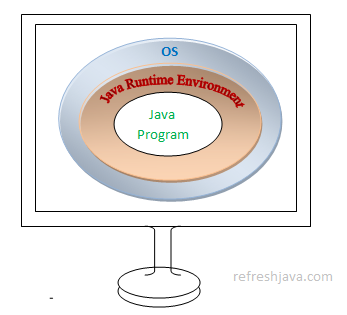 How does computer understands java program ?

Java platforms are basically java softwares that is used in development and execution of java programs or applications. You can download and use these softwares. There are four types of java platforms :

Why do java provides different types of platforms ?

This is the most basic or core platform. It defines basics of java language like data types, syntaxes, classes, objects, interfaces etc. It also includes some high level classes that are used for security, networking, database access etc. All stand-alone or desktop applications are developed using this platform. AWT and Swing used for developing desktop applications are also the part of Java SE Platform. A programmer can also consider Java SE's API as Java programming language.

Apart from core API's, it also consists of a java virtual machine (JVM), development tools, and other class libraries which are commonly used in Java applications.

This platform is built on top of Java SE platform. It also consist of an API and runtime environment that is used for developing and running large-scale, multi-tiered, reliable, scalable and secure network applications. All the java web and enterprise applications are developed using this platform. Technologies like servlet, jsp, struts, JPA, EJB etc are part of this platform.

This platform also consists of an API and a small virtual machine for running Java programs and applications on small devices like mobile phones. This API is a subset of the Java SE API, along with some extra class libraries that is useful for small device application development. All java mobile applications and games are developed using this platform.

JavaFX includes a set of graphics and media packages to design rich client applications that can run consistently on different platforms. The basic intent was to replace Swing because it was bit complex. JavaFX offers a much simpler way to create desktop applications as well as rich internet applications because it provides the facility to develop user interfaces as well. JavaFX Scene Builder provides drag and drop UI component feature to develop applications.

With time the use of java has increased significantly which makes it one of the most preferred language for programmers and enterprises. According to Oracle, more than 3 billion devices runs java. There are many devices where java is currently used. Some of the popular devices that uses java are ATMs, Smartcards, Routers, Switches, Smart Meters, Access Control System, Medical Devices etc. There are huge number of applications and softwares that uses java in one way or other. Some of the usage of java are :