Generally you need an object of a class to access members like variables and methods of that class, because these members belongs to object or instance of that class. Each object have their specific values for such members. But sometimes we need members that should belong to class rather than objects and should be same for all the objects. To achieve this java provides static keyword. static members belongs to class not objects. You can access such members using class name itself rather than objects. Let's see the different usage of static keyword.

As soon as java virtual machine loads your class inside memory, static variables of your class are created inside the heap memory and it's created only once, it's not created separately for each object unlike instance variables. As soon as the execution of your program finishes, static variables are removed from memory.

static variables belongs to class and is common to all objects of a class. There is only one copy of static variable available that is shared with all the objects of that class, if changes are made to that variable value using one object, all other objects will also see the effect of changes. The image below shows how two objects obj1 and obj2 of Student class shares a static variable collegeName which is created only once. 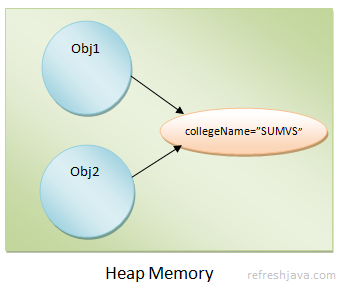 When to create static variable ?

You should create a static variable when you need a variable that should be same for all the objects of a class or in other way you need a variable that is not different for each objects. For example a Student class can have a static variable as collegeName, since it will be same for all the students of a college while variables like name, age, rollNo etc can be declared as instance variables since these will be different for each students.

You can access static methods directly inside your class but outside the class(in other classes) you must need class name or object name to access the static methods of a class.

When to use static methods in Java

There are not any defined rules but there are some observations that can be used to create static methods.