Inheritance is one of the fundamental principle of object oriented programming. It is used quite often in java programming language. This tutorial covers different details about inheritance like what inheritance is, real world example of inheritance, how it is achieved in java, what are the advantages of using inheritance etc.

In general the meaning of inheritance is something that you got from your predecessor or parent, the same applies with java inheritance as well. Inheritance in java is a mechanism by which one class is allowed to inherit the features(fields and methods) of another class.

Inheritance allows you to create class hierarchies, where a base class gives its behavior and attributes to a derived class.

We can take parent and child relationship as an example of inheritance. The properties of parents like hands, legs, eyes, nose etc and the behaviors like walk, talk, eat, sleep etc are inherited in child, so child can also use/access these properties and behavior whenever needed. 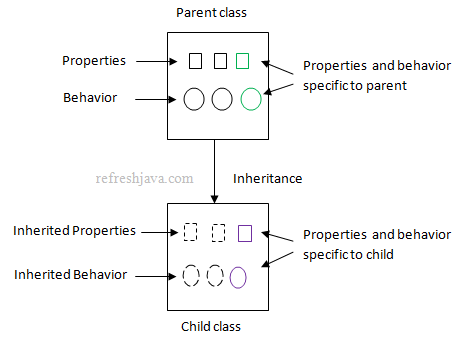 Generally in programming, the child classes will have more features than parent classes as they declare their own features as well apart from inheriting the parent classes features, so do not over indulge with real life example of inheritance.

How to achieve inheritance in Java ?

Who decides whether to inherit a class or not ?

It's the programmer's who decides whether his class needs to inherit(extend) another class or not.

Now let's see how we can inherit the features of a class using the program below :

Here you can see that the object of child class A is able to access the add method and message variable of class B, because the methods and variables of class B is inherited in child class A using extends keyword.

Can I access every member of parent class in child class ?

What is IS-A relationship ?

When to use inheritance in java ?

What we can do in subclasses ?

The subclasses can do everything that a normal class do along with inheriting the variables and methods of parent class, just to list down some of the things :

What if I don't want my class to be inherited by any other class ?

Declare your class using final keyword, eg. final class A { ... }. Final classes can not be inherited. We will see details of final keyword in later tutorial.