What is bytecode in Java

In java when you compile a program, the java compiler(javac) converts/rewrite your program in another form/language which we call as bytecode. The .class file that is generated after compilation is nothing else, it's basically the bytecode instructions of your program. The word bytecode and .class are used interchangeably, so if someone says bytecode, it simply means the .class file of program. 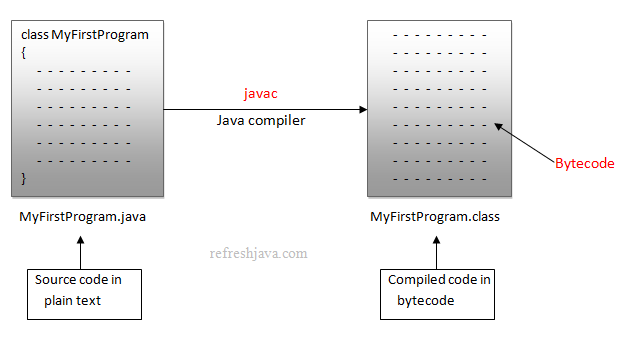 Bytecode is also one of the java's magic because this along with java virtual machine(JVM) makes java platform independent and a secure language. It becomes platform independent because you can run the bytecode generated on one machine on any other machine without the need of original .java file, all you need is the jvm/jre software installed on that machine. For example .class file generated on windows machine can be run on linux machine.

Bytecode also makes java secure because it can be run by java virtual machine only. Also any explicit edit in .class file breaks down the class which means you will not be able to run your program through the edited .class file.

No, Computer doesn't understand bytecode directly. At runtime the bytecode is converted into machine specific code by java interpreter. This machine code is then executed by the computer processor to generate the output of program.

No, bytecode is not human readable.

Who generates bytecode in java ?

Bytecode is machine independent code, it can be run on any machine, you just need the JRE/JVM of corresponding machine.

How does java bytecode works

The image below shows the execution flow of a program in java.

In java a program(.java file) is compiled first using java compiler(javac). After successful compilation the bytecode(.class file) of that program is generated. Now when you run the program using java command, the java virtual machine(JVM) loads the .class file inside memory and then converts(by java interpreter) the instructions of .class file into machine executable code and finally executes that machine code in order to generate the output of program.

Does same bytecode is generated of a program if compiled on different operating system ?

Yes, Same bytecode is generated of a program even if compiled on different operating system.

What is write once run anywhere(WORA) in Java

Write Once Run Anywhere(WORA) is a feature in java which says write your program once and then execute it anywhere(OS). In java it is achieved with the help of bytecode. Programmer needs to write the program once and can execute the .class file generated from it anywhere and any number of times.

What is the use of bytecode in Java

Some of the advantages of bytecode in java are :

Bytecode is an intermediate code, it can not be run directly on any machine(computer, laptop etc). It must be converted into machine code before it can be executed. In java, java interpreter(part of jvm) converts the bytecode into machine code.

Machine code is native or low level code that machine can understand and execute. They are generally binary or hexadecimal instructions which can be executed directly by computers CPU.

Difference between source code and bytecode

What is bytecode verifier in java

As soon as you run a program, the classloader(part of jvm) loads the .class file in memory. After that the bytecode verifier verifies if the bytecode is valid or not. If it's valid then only it is passed to java interpreter for further execution.