Types of Variables in Java with Example

Java has divided variables in three different types according to their accessibility. These variables are called as :

What if I don't initialize my local variable with some value ?

Your program won't compile. Compiler will throw compilation error hence you won't be able to run your program.

Variables defined inside a class but outside any method are called as instance variable. Initialization of instance variable is not compulsory, if not initialized, these variables will have default values as per their data type

Variables defined inside a class but outside any method using static keyword are known as Static variables. Initialization of class variable is also not compulsory, if not initialized, these variables will have default values as per their data type.

Class variables as the name suggests, belongs to class and is common to all objects of that class. These variables are created as soon as the class is loaded inside memory. There is only one copy of static variable that is shared with all instances of that class, if changes are made to that variable value using one instance, all other instances will also see the effect of changes. Static variable can be called using class name as className.staticVarName or using any of the object instances as objName.staticVarName.

Which approach I should prefer to access a static variable, using class name or instance ?

Though you can access static variable using instance name as well, but accessing using class name is a good programming style as static variables belongs to class not instance. 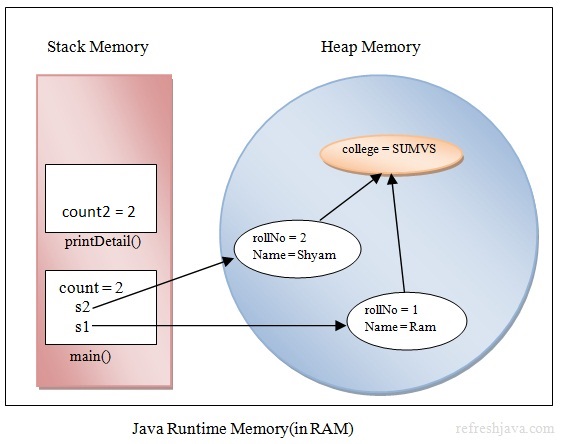 Can I declare a local variable with same name as instance or static variable name ?

Yes, you can declare a local variable with the same name as an instance or static variable name declared in a class. When accessed from within the local block or method, local variable will take precedence over others.