Sub packages in itself are packages, so you have to use/access them similar as packages. They can also have any types like classes, interfaces, enums etc inside them.

How to create and use sub packages in Java

It's similar as creating packages in java. In previous tutorial, we created a package mypack which is a directory in computer. Now if I create a package(directory) testpack inside mypack directory, then package testpack will be called as sub package.

Let's create a class inside this sub package. I have created a class MySubPackageProgram.java as given below and saved it inside D:\project\mypack\testpack directory.

Notice here the package name is mypack.testpack which is a subpackage. Let's compile and run this program by executing the commands given below. If you don't know how to compile and execute package program, refer packages tutorial first.

Why do we create Sub Packages

Subpackages are created to categorize/divide a package further. It's similar as creating sub folder inside a folder to categorize it further so that you can organize your content more better which will make easy to access the content. A package may have many sub packages inside it. 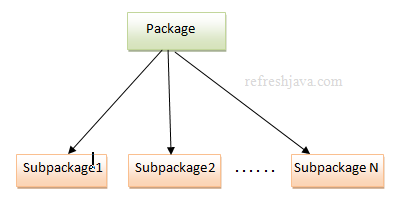 For an example in our computer generally we create directory like songs to store songs inside it. Then inside that we may create sub directories like hindi songs and english songs or old songs and new songs to categories the songs directory further. Doing this help us to organize or access the songs easily. The same thing applies with sub packages as well.

How to import Sub packages

Example of Predefined SubPackages in Java

The program below shows how to use the Pattern class of java.util.regex subpackage. This sub package contains classes and interfaces for regular expressions. The Pattern class is generally used to search or match a particular pattern inside a given string.