Call by Value in Java

Before we understand call by value mechanism, let's first understand how a variable or object is stored in java, it will help us to understand the mechanism better. 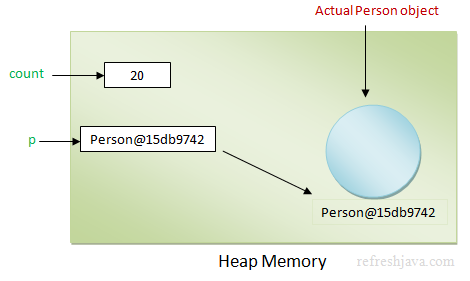 Note : The reference(Person@15db9742) of object p given in above image is not the exact memory address. It is just used as an example to understand how non-primitive variables are stored in java.

How parameters are passed in Java

How references are passed in java ?

In java, the reference of an object is itself a value. In call by value mechanism, this value(reference) is itself passed to called method.

Call by value program in Java

The program below shows the call by value mechanism for primitive type variables in java. The changes made in called method will not be reflected in calling method.

The program below shows the call by value mechanism for reference type variables. The changes made in called method would be reflected in calling method as well.

As you can see from the output, after changing the values in changeValues method, the value of attributes age and height for object p is changed. This is happening because the reference of object p is passed to method changeValues which is then assigned in object q. Object q makes the changes on same reference that is why the changes are reflected in calling(main) method as well.

If you assign null or create and assign a new object(new Person(30,160)) to object q in above example, the actual object p will not be affected, it will still be pointing to same object.

How String variables are passed in Java

Since String is also a non primitive data type in java, so it's the reference of variable which is passed to called method. But the interesting thing is that, if you make any changes in String variable in called method, it doesn't reflects in calling method. Let's see the example first, then we will understand the reason behind this.

What if I pass objects of wrapper classes like Integer, Float, Character etc in method calling ?

Wrapper classes in java are also immutable like String class, if you make any changes in called method, it won't be reflected in calling method.