This tutorial explains method chaining and method recursion concept. These are basically a mechanism related with method calling in java programs. Sometimes it is quite useful to use these concepts in our programs. We will see these concepts with program examples in this tutorial.

Method chaining is possible on these method because each of these methods returns an object, which is then used to call the next method. For example the definition of append method of StringBuilder class is like below :

The method is returning this, that is why we are able to invoke it multiple time in same line. In java this is a reference to the same object on which the method is being called. We will see the details of this keyword in later tutorial.

The program below demonstrates method chaining using the methods of String and StringBuffer classes. Methods like insert, append, substring etc allows us to use the technique of method chaining.

Using method chaining has couple of benefits like it improves the readability and reduces the amount of source code. But it also has some disadvantages as well like It's hard to debug if any of the method fails while execution. Exception handling also becomes tough, sometime it's confusing as well.

Method recursion is a process in which a method call itself from within it's body. The method that calls itself is known as recursive method. The code below shows an example of recursive method :

As you can see method calculate is calling itself, we can say calculate is a recursive method. Generally programmer uses some conditional/looping statements to call the same method. If we don't use any condition, the execution of method keep repeating itself again and again which results in an infinite recursion.

Factorial of a number using Recursion

As you know once a method is called, a new stack(memory) is allocated for method. This stack is used by method to store it's variables and performs it's operations and finally return the result to caller. In recursion every time the method is called, a new stack is allocated on the top of last stack. Once the last call happens, the method on top most stack evaluates it's result and returns the output to it's previous stack. The same process goes on until the method at first stack evaluates it's result and returns the result to it's caller. 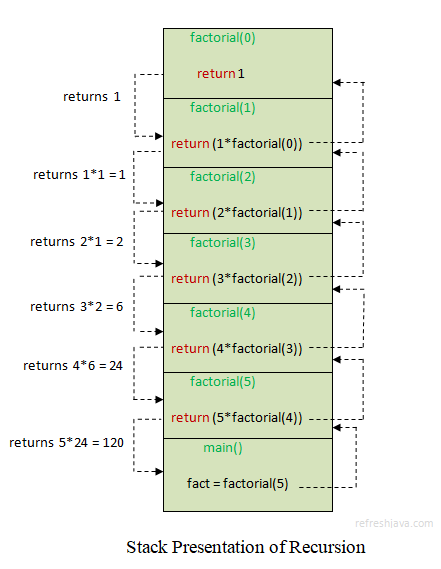 The condition statement that we have used in this program will always be true, as we are decreasing the number in each iteration. This will result in calling the method again and again. So you have to use the recursion carefully to avoid the infinite looping. If you change the conditions as if(num >= 1) the program will run successfully.