What is JDK JRE and JVM

The terms JDK JRE and JVM are used very frequently in java programming. Some programmers find it little difficult to understand what exactly they are, the differences in them and which one is needed for their requirement. Let's understand these things in this tutorial.

What is tools in java ?

A tool is an utility or program which helps programmer to accomplish a task. For example javac, java, javap etc are tools. javac is used to compile a program while java is used to run a program. If you have installed java, you can see these tools(available as .exe files in windows) inside bin folder of java installation directory.

What is libraries in java ?

What is JDK in Java

JDK stands for java development kit. As the name itself suggest, JDK helps the programmer in development(compilation and execution) of java programs. It's a software package that contains tools and libraries needed for compilation and execution of java programs. If you are a programmer then you must need to install JDK first in your system in order to start programming in java. For windows os, this software generally comes in the form of .exe or .zip file. 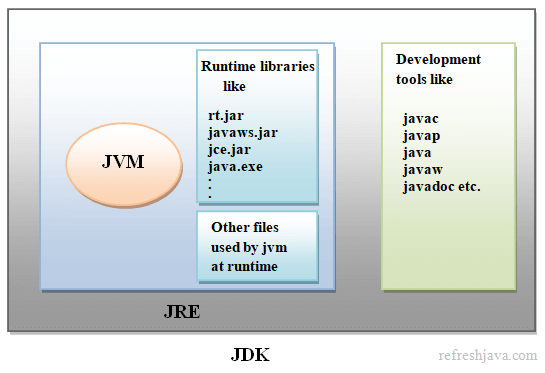 The JDK is a superset of JRE, which means it contains JRE in itself. Apart from JRE it includes tools for developing, debugging, and monitoring java applications. Some of the important tools are java(Java application launcher), javac(java compiler), javap(java disassembler), javadoc(java documentation tool) etc.

Does jdk exist physically in computer ?

Yes, JDK exists physically in computer. If java is installed in your computer, you can see the jdk in java installation directory. In windows os, by default it get's installed in C: directory as given in below image.

Can we run java program without jdk ?

Yes, we can run a program without JDK if we have already compiled that program. If not compiled, then we can't run without JDK because java compiler(javac) is inside JDK, not in JRE. A compiled program(.class file) can be run with JRE only.

What is JRE in Java

JRE is a superset of JVM, as it contains JVM in itself. At runtime, JVM loads the required runtime libraries and files of JRE in memory in order to execute the program and generate the output.

Yes, JRE also exists physically in computer. If java is installed in your computer, you can see the jre in java installation directory. It exists inside jdk directory. Current downloads of JDK provides a jre parallel to jdk as well.

What is JVM in Java

JVM stands for java virtual machine, a virtual machine which loads and executes java programs in memory. As soon as you run your program by using java command, a java virtual machine is created which has some default size of memory available for loading and executing classes, objects, variables etc of a program. The machine loads not only your class(program) but also other required classes and libraries as well which are needed to execute the program.

It's a virtual machine because you can not see this in your computer. Also it's java virtual machine, it can execute only java programs and applications. JVM is not a separate software package, instead it comes as part of JRE package. If you have installed JDK or JRE then you don't have to do anything else for JVM. it will be there. Let's see some of the tasks performed by JVM:

No, JVM is platform dependent. There are different jvm implementations for different operating systems(windows, linux, MacOs etc) from different vendors. JVM along with bytecode makes java as WORA(write once, run anywhere) language.

Difference between JDK JRE and JVM