Polymorphism in Java with realtime Example

What is Polymorphism in Java 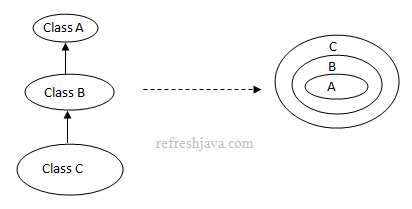 As you can see object of class C can be assigned into any of it's parent class which means class C object can take forms of class B and class A as well along with it's own. This means object of C class is polymorphic in nature. The same happens with class B object as well which can take the form of it's own and class A.

To take a real time example, we can consider ourself. As a person we have many different forms like student, teacher, player, father/mother etc. The same person can be a teacher as well as a player, so we can say person object is polymorphic in nature.

Another real world example is your mobile. Sometime your mobile behaves as a phone, sometime as a camera, sometime as a radio etc. Here the same mobile phone has different forms, so we can say the mobile object is polymorphic in nature.

How to check if an object is polymorphic.

Any object which have more than one Is-A relationship will be called as polymorphic object. For example in the scenario of class A, B, C given above, following observation will be true.

So in java every object(except the object of Object class) is polymorphic, no matter whether it's an object of user defined class or java's predefined class.

An is-a relation in java can be tested using instanceof operator. If an object passes more than one instanceof test, that object will be polymorphic.

Advantages of Polymorphism in Java

In java we have some more concepts/terminology in context of polymorphism which are runtime and compile time polymorphism. These polymorphism are categorized on the basis of resolving the call to a polymorphic method(A method having different forms). We will see these types in later tutorial.